Wholesalers: their only viable revenue model. Blockchain: pleased to meet you.

You are here:
Distribution 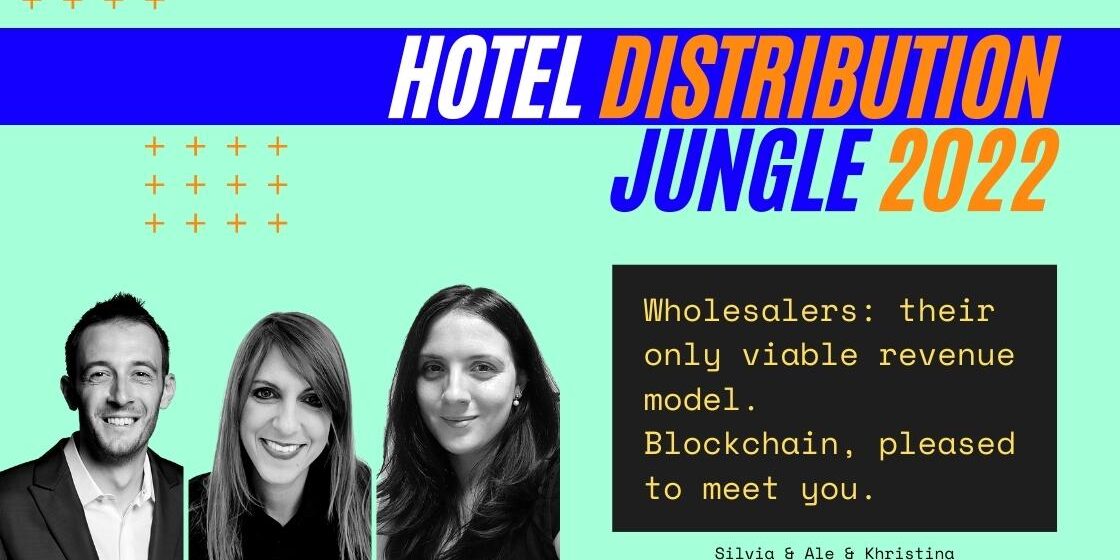 In this co-written article with colleagues and friends Alessandro Crotti and guest and revenue queen Khristina Quigley, we’re going to deep dive into the magic world of Wholesalers and Bedbanks. Whether you like it or not, they have radically changed the way we have been selling our rooms over the past years and our approach to online distribution as well. We believe there is no black and white in distribution but a fair mix of greys: you just need to find the right palette! So how do we make sure we are in control and do not end up being strings attached? Is there a real viable model that is healthy for all parties involved? Will blockchain turn the tables?

Me, Alessandro and Khristina have very few filters, that is why I get on with both of them. Again it’s 100% us in all our opinions and this second part of this little distribution series, hope you enjoy it comment and share!

Last quarter of 2017, I was consulting a GM of a hotel in Milan and he told me that the day before he got a business meeting with the representative of a big wholesaler he had been having a contract with for many years already (I won’t make names this time), as they needed to talk about extending the contract for the new year.

Immediately, the representative showed him the numbers: I don’t quite recall the exact digit, but approximately it was 2000 room nights that the wholesaler generated for the hotel, year to date.

2000 RNs for a hotel with less than 140 rooms in total is quite something indeed. And that was of course the starting (sticky) point used by the representative to discuss contracts, renegotiation, allotments, rates, cheap rates, super cheap rates, naughty-cheap rates, disgustingly-cheap rates.

Let’s talk truth here: Hotels love volumes, we need to fill our rooms right? And the earlier we do it, the better we sleep (right again?). Hotels love to build that lovely bulk that makes them feel like they are in a safe place and they can always yield on the remaining rooms left to sell. (right again and again?)

If that was so easy, we wouldn’t be here writing this post.

The complexity of distribution lies in the fact that volumes do not necessarily mean profit and that hidden costs and lost sales can be more hurtful than any distinguish-cheap rate negotiation.

So before committing to any appealing volumes promise, question whether your generated room nights were incremental or shifted.

Hotels should evaluate opportunities and risks based on their markets:

In the beginning, wholesalers used to distribute as they were supposed to: offline, packaged, and B2B, leveraging the power of connections and direct relationships.

The change is the natural evolution of the increasing online purchases, OTAs gaining power year after year and growing their market share compared to the other channels. The traditional wholesaler business model is obsolete and the tap into online sales represents, in some cases, a way to survive.

Bedbanks as the natural digital evolution of the Wholesaler?

Bedbanks can be seen, in a way,  as the evolution of the traditional wholesaler, leveraging their tech-based B2B platforms they can feed Wholesalers, Travel Agencies, OTAs, Airlines, and the wide distribution they can reach make them even more powerful when it comes to contractual terms and rate agreements…and chaotic on the distribution side!

In part 1 of this distribution series, we covered the crazy booking path of one reservation that apparently looked like being OTA->CUSTOMER  but that in reality, it came like OTA→SWITCH->BEDBANK->TRAVEL AGENCY ->DUAL MODE OTA ->CUSTOMER

Dual-mode OTAs (basically all OTAs) can get rates from different sources online and pick the lowest one to feature on their rate return. Most of the time, the rate is picked from a Bedbank or Wholesaler and sold unpackaged thus undercutting the Hotels’ direct price. (even with that famous 1 euro margin covered earlier).  This is what happens when you see a “booking.basic” tag on your Booking.com room listing when a low rate appears on Expedia or Agoda or any uncontracted site that is undercutting your rates at that given moment.

Bedbanks distribution can basically reach any third-party feed (including gift box sites and welfare platforms, proved!) so the opportunities are there…along with risks if you just let it go without making sure that the agreement is profitable on both sides (and not only theirs).

So you got homework, ask yourself some questions when evaluating your wholesale business:

Once you ask yourself those questions and deep dive into each channel’s total value, you will be able to refine your strategy. Balance is in the middle. Compromise at times, zero tolerance at others. Win one bottle, lose another. Make sure your Hotel wins the war!

Blockchain this unknown…will it put an end to the rogue rates distribution?

For the last 4-6 years all we have heard in the hospitality world is blockchain, but do we really know or understand what it is and what it can do for us for hotel distribution?

Blockchain is an open, distributed ledger that can record transactions between two parties efficiently and in a verifiable and permanent way. Blockchain operates as a continuously growing list of records, called blocks, which are linked and secured using cryptography/secure communications. Each block typically contains a cryptographic hash of the previous block, a timestamp, and transaction data- everything is transparent!

If we created an inventory distribution chain a hotel would be able to see exactly who moved its inventory and rate where and could shut off the supply immediately for the offending party!

We’ve spent years paying high commissions and relying on the big players in the OTA (Online Travel Agent) world to drive business to us! Blockchain technology has started to permeate the travel ecosystem and we are now seeing the rise of large and ever-evolving blockchain booking platforms, such as Travala and FlyKube. Through the direct link with an API to the PMS the hotel can sell its rates and inventory in real-time, and not deal with delays in information being pushed, or legacy rates and ghost inventory from a third party. If we adopted smart contracts, then we could create rules such as automatically being reimbursed the difference between wholesale/ tour operator and retail rates, if it was resold outside of contracts.

This also comes with a cost-saving as many of these channels offer 0%-10% commission, rather than the traditional 15-25%.

No more OTA exclusive reliance but opening the hotel to a new wave of travelers who want to avoid the traditional OTA and pay with an alternative payment.

The use of this technology also opens new remote destinations to people, globalizing local hotel properties of regions that never had tourism in the past. Loyalty schemes aren’t just for big brands and blockchain allows a hotel to tie up with other companies to offer rewards and redeemable points in other establishments.

Paying with alternative currency such as ADA, BitCoin or any other cryptocurrency eliminates the need for intermediary financial institutions like banks and the transaction charges posed by them. The payments are transparent into the hotel’s wallet and are encrypted, making it highly immune to fraudulent activity, which we as hoteliers have experienced for years with traditional methods. Passenger identification, baggage tracking are other areas where blockchain technology can benefit the travel industry.

Blockchain isn’t new anymore, but it will take many years, our prediction 15y, to change how we price, sell and distribute rooms. There have been many successes to date with CitizenM and TUI adopting this model, but until hoteliers can understand this technology more and see live examples, it will be a slow process. We need hoteliers to act now, learn now, explore now! Not wait til the next pandemic or it’s the biggest new trend in your compset!

This is a new wave of guests and insights to explore.

Hotels vs OTAs: focus on Data-Driven Smart Distribution
6 May 2020

THE ONLINE HOTEL DISTRIBUTION 2.0 IS LIKE MOTORCYCLE RACING
16 March 2019
Recent Articles
Categories
Search
Go to Top
Manage Cookie Consent
To provide the best experiences, we use technologies such as cookies to store and / or access device information. Consent to these technologies will allow us to process data such as browsing behavior or unique IDs on this site. Not consenting or withdrawing consent may adversely affect some features and functions.
Manage options Manage services Manage vendors Read more about these purposes
View preferences
{title} {title} {title}